Well now, this was an interesting meal to make. Not only was it hard to think of a meal to make after Moya dropped the “N” in my lap, but Nigirizushi isn’t the easiest thing to make, especially keeping health in mind. Since we’re dealing with raw fish here, we need to be very careful in our preparation and handling of the fish, to make sure nobody who eats it gets sick.

The other thing that’s absolutely necessary when making Nigirizushi is a very, very sharp knife. Fish is extremely delicate, especially when raw, and a blunt knife will easily destroy the flesh, which we really don’t want to have happen. I used a brand-new knife from the Shun collection, folded damascus steel, extremely sharp. While expensive, it’s a beautiful knife that’ll last a very long time, perfect for working with delicate fish. 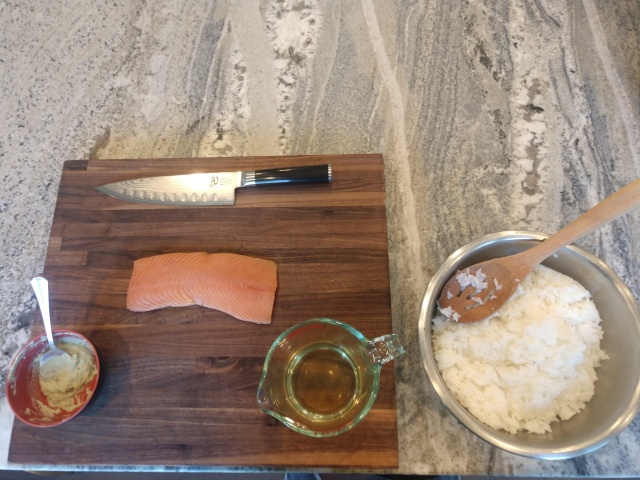 Let’s start with the rice. In order to have beautiful sushi rice, we’ll need to thoroughly wash our rice before cooking it. Rinse it gently in cold water, agitating with your fingers, until the water stops running white. This removes the starch from the rice grains. We’ll add our rice into a rice cooker, 1.5 cups of cold water for each cup of rice. We’ll also add 1 tsp of salt to the water, and stir in thoroughly, before setting it to cook.

Next up, our rice wine vinegar. Take 1 tbsp of rice wine vinegar, and add 1 tsp of sugar, for each cup of rice being cooked. Gently heat this mixture until the sugar is fully dissolved, then let cool completely. When the rice is done, it should show each grain clearly, and not be too mushy; be careful not to overcook the rice. With a wooden spoon or rice server, gently agitate the rice, letting out the steam, before cooling completely in the refrigerator.

When the rice has been cooled, add the vinegar mixture to the rice, stirring carefully so that it coats the rice evenly, giving that signature glisten you like to see in sushi rice. then, carefully use your hands to shape into evenly-sized balls.

Now, let’s look at our fish. I used fresh alaskan salmon my dad had brought back from a fishing trip not too long ago. You can use fish from a fish market, or fish it up yourself. The important thing is that because it’s raw fish, make sure it gets thoroughly chilled, perhaps even frozen, before use, in order to kill off any bacteria or parasites that could potentially be in the fish.

If using pre-cut fish, you should be fine, but for a whole fish, make sure to remove the guts, the head and tail, and then cut the good filet meat from the side of the fish. make sure to be careful of bones, especially the tiny ones that can be hard to see with the naked eye. Carefully slip your knife under the skin of the fish, and cut gently as close to the skin as possible, to remove it from the fish.

Now that we have a workable slab of fish, use your sharp knife to cut the fish into thin slices. Make sure to cut AGAINST the grain of the fish, otherwise there’s a chance it’ll fall apart on you. I personally aimed for no thicker than 1 cm. Depending on the size of the fish, you may have to layer several pieces on top of the rice ball in order to completely cover it. I like to add a small dab of wasabi on top of the rice before putting the fish on top, for a bit of extra flavor. You can also sprinkle the top of the fish with just a touch of salt, if you like.

It might be a bit of a hassle to make, but I guarantee if you can successfully make Nigirizushi, you’ll be the talk of the town, or perhaps the fancy anime night you like to host at your house.

N was a tough one to drop on me, Moya, but I was thankfully able to think of one dish to make. Unfortunately, sushi isn’t exactly the easiest thing to make, especially if you want to avoid food poisoning afterwards. If i’m being honest, I couldn’t actually think of a specific scene in an anime that highlights Nigirizushi… but i’ll chalk that down to the difficulty of trying to find a dish that started with N in the first place.

“N” is definitely my bad. Though I must say that not giving you a vowel after that is actually a lot of freedom! The food poisoning is one thing I immediately think about when it comes to sushi-making (though I have a neighbour who just buys Costco salmon and eats it raw in slices regularly).

I also can’t think of any anime that has a scene specifically about nigirizushi, though I’m sure it shows up all the time in the background. But I do enjoy sashimi so let’s talk about it. Salmon vs. tuna, Astral?

Well, I ended up using salmon for this, since my dad had just recently gone fishing up in ALaska and brought home an absurd amount of salmon. I actually don’t have a preference between Salmon or Tuna though, I think they’re both delicious in different ways. Tuna is a lot denser meat, you can even cook it like a steak if you have the right tuna! Salmon is a more delicate fish, usually with some beautiful fat content in the meat that helps it fall apart better.

Basically, I think they’re both just absolutely delicious. What about you?

Woahhh that’s really fresh salmon then. I think I’m for salmon all the way, though I do appreciate my tuna in a poke bowl when salmon isn’t an option. Idk, I don’t think I’ve ever had bad sashimi salmon, but I have had bad sashimi tuna (it has a slight taste of…iron?).

That’s a shame. It’s always kind of sad when good ingredients aren’t given the care they deserve. Salmon is super delicious though, and in my opinion, the fattier the better. Those stripes of fat you’ll see in a good salmon sashimi just make the fish quite literally melt in the mouth. So, I expect you’ve got an idea about your next dish?

Ummm~ Fatty salmon. Good in miso soup as well. My next dish has already been made! Please keep an eye out for it. 🙂