Another week and another episode down in the wonderful world of the episode-swapping collab with Plyasm!! We’ve been taking some friendly jabs at each other, but it’s been a great time so far, even though we were both pretty busy this week.

Speaking of this week… HOT DAWG, were both of the episodes this week just so, SO GOOD! I was blown away by both Shield Hero and Dororo this week, for real. Very, very impressed with what both of the shows have delivered so far, and it’s only episode 3!!! Make sure to check out our Shield Hero episode 3 review over on Ply’s blog… but for now, let’s jump into Dororo!

Me, the supreme samurai

The young squire who cleans the chamberpot

Fantastic. Another excellent episode of Dororo, one where we learn a bit more about the prosthetics doctor, Hyakkimaru’s past and childhood, and his quest for vengeance, whether he realizes it or not. I really love the way the narrative is laid out in this show, not giving out too much information at once, preferring rather to “show, not tell”.  Great show.

This is the only training arc and the only supporting character development I’ll ever need. God damn, I still don’t know the name of the prosthetics limb maker but I already want to know way more about him. This series seem to do this a lot. First with Hyakkimaru, and now his adoptive father. Overall, great episode, I want more. MAPPA is doing a great job as always.

Basically, it was really, really good.

I think this episode pretty much surpassed my expectations. It got quite a bit darker than I’d expected, with the doctor’s backstory taking up a decent chunk of the screentime. It’s dark, it’s brutal, it’s very emotionally charged, and I loved every minute of it.

This episode went differently from how I imagined it, namely that there was no advancement in terms of plot(linear plot progression), but rather the plot branched outwards and started filling in the gaps that we want filled. However, it’s definitely a good thing and I like it.

I really loved the way they filled in the backstory as an after-the-fact thing, making us curious during the first 2 episodes as to Hyakkimaru’s background.

What do you expect to happen from here on out?(and why) [Only for stuff never seen before]

From here on out, I think our group of misfits may begin to look into Hyakkimaru’s condition. If they discover the reason, it may lead him back to his father, his mother, and his estranged younger brother. I’m excited to figure out more of what each demon took from him as well, and I definitely want to learn more about Dororo.

I expect the journey to finally continue next episode. Maybe they will meet the prosthetics maker once and for all?

They’re gathering a motley crew at this point, for sure.

Which scene would other people react to differently… I honestly don’t know. This episode was pretty full of great scenes, but I really can’t think of any that people would react to differently. Perhaps the scene where the doctor’s apprentice abandoned him? I think the boy may have overreacted a bit, especially as the doctor was genuinely trying to repent of his sins.

I think the scene that people would react to differently would be the kid leaving the prosthetics maker. I can’t really justify this one, it feels way too stupid and forced. Even though he did work for the lord back when the wars were on and committed many atrocities, he is doing his best to make up for what he took away and more. Plus, it’s not like he wanted to do it anyways. Other people might not think much of it, but I don’t like that kid now.

We kind of had the same thought process here, huh?

I think the biggest focus character this episode was the doctor. Learning of his past, serving a tyrannical lord and killing dozens of people, and his attempts at redemption… It was equal parts tragic and beautiful to watch. Hyakkimaru eventually becomes his last chance at salvation, and he sets the boy on his quest to reclaim his body.

The prosthetics maker. God damn, this man is great. He’s been through a lot, and the entire backstory just speaks volumes about his behaviour. He’s not just doing the kind things just because, he’s doing it because he has lots of regrets he wants fulfilled, albeit with other people.

Yeah, I loved his story. The way it was written and portrayed did just such a great job expressing what needed to be expressed without cluttering the story with exposition.

I think the high point of the episode for me was probably the very beginning, actually. The incredible cinematography, the crosses in darkness juxtaposed against the vivid, flaming sun cut quite the striking image, and really kicked the episode off to the strongest start yet.

Hyakkimaru leaving the prosthetics maker to go on his journey. Damn, almost cried. Very touching, even though there was only a few minutes of screentime of the both of them together, I can feel the care flowing through, as though I’ve watched them for several years. This anime does timeskip right.

Yeah, the characters here just feel so human. The writing is so excellent, I need more in my life.

I don’t know that there’s much improvement to be had, here… It’s honestly just so good it’s hard to even nitpick.

The most relatable action, huh? I actually think right at the end, Hyakkimaru stepping into the flames to experience the feeling of pain. If I’d been without feeling my entire life and suddenly could feel things… I think I’d want to feel as much as I could. He’s like a kid who’s never been told not to touch a stove.

This question is always the hardest in Dororo. I suppose, Hyakkimaru’s actions after getting his sense of pain back. You are going to want to test it out, as well as the limits. Getting your sense of pain back is both a good and bad thing.

I was right about it being his nervous system, ya nerd!

I think in the doctor’s assistant’s case, I would have handled the situation a bit differently. I mean, the kid’s known the doctor most of his life, admired him and seen for years how hard he works for others. I think I would have held a bit more trust for the doctor, rather than just trying to kill him immediately.

I would pick the start, I guess. Having to do such cruel things to others just to survive feels…bad. As the wimp I am, I probably wouldn’t do it. Just…do something else or starve, I guess.

Again i’m going to have to go with this opening scene here. The visuals were just so incredibly striking, it really has stuck with me. 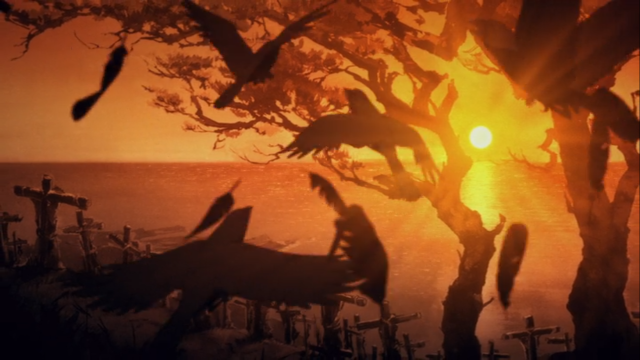 If you couldn’t tell, we’re both absolutely loving this show. For real; it’s tough to find faults with the episode sometimes; it’s just that good. Honestly, i’m really, really excited to see where this wild and crazy ride is taking us, because it’s only the beginning and i’m already loving it.

The pacing issues I talked about before seem to have been fixed, too. The pacing of this episode was just perfect, and the backstory for both the doctor and for Hyakkimaru were blended together in just such a way to work extremely well. It flowed smoothly, and did a great job telling the story without infodumping.

Anyways, that’s all I’ve got to say about it for now. Make sure to check out Shield Hero over on Ply’s blog! Also, make sure to let us know what you guys think of these shows so far down in the comments!! We’re loving them so far, but we’d love to hear some other people’s opinions!! Thank you all very much for reading, and i’ll see you all in the next post!

One thought on “Dororo Episode 3: Repentance and Grief (with Plyasm)”