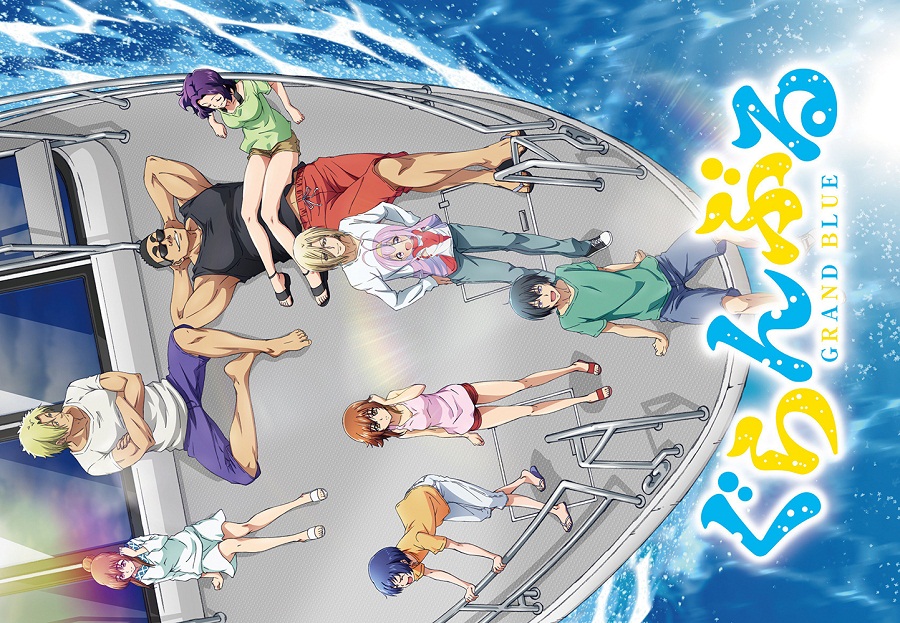 Well… I originally put this show on my radar because I heard it was about Scuba Diving. As a diver myself, I thought hey, this might be cool to watch, maybe I can relate to it somewhat. I was not at all prepared for the wild ride this show would take me on, and in just a single episode, no less.

Out of everything i’ve seen so far this season, Grand Blue Dreaming had me rolling on the floor within minutes, and kept me there for the entire episode runtime. The chaotic hilarity of the show is a huge draw, though if you’re not one for crass humor, you may want to avoid this one. It’s a pretty mature watch, from the look of things.

Iori Kitahara moves in with his uncle and two cousins, living in their dive shop called Grand Blue. He meets the members of the Scuba club at the local university, a group of mostly buff guys who, well… enjoy stripping down naked. Try as he might, Iori gets roped into their mayhem, earning him quite a bit of embarrassment, as well as the scorn of his cousin, Chisa.

Grand Blue Dreaming is doing a loooot of things right. The comedy is great, sure, but the show is more than just that. It looks fantastic. You thought we had a good face game with Golden Kamuy and Hinamatsuri? Grand Blue Dreaming is here to set the record straight, and show us all who the true king is. The facial expressions in this show really put in the work to enhance the comedy beyond the realm of common sense into the beyond realm.

The art in itself is very nice, as well. The water, backgrounds, and everything looks very refined, highly polished and just nice to look at. The music is great as well, with a nice OP, a fantastic ED, and a generally suitable soundtrack as well, that does a good job staying in the background, helping us focus on the action.

The only real issue with the show is that, for many people, it’s locked behind Amazon Prime for viewing, so unless you’re willing to go to an unofficial site for fandubs, you’re going to struggle to find the show. Add to that the fact that some might be turned off by the brazen facial animations, and the crude humor, and it might not be a good pick for many.

Despite that, however, i’ll gladly recommend this show to everyone. I’m enjoying it greatly, it’s a ton of fun, and deserves some recognition. Who else is watching this show this season? How are you getting around the Amazon bars? And of course, how are you enjoying the show so far? Let me know down in the comments, and i’ll see you all in the next post!