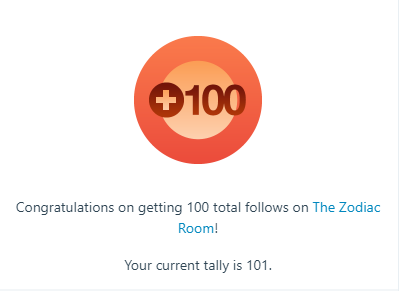 Thank you all for the awesome questions you left for me for this 100 follower landmark! I really appreciate the support (and the attention), and i’m excited to be able to answer you guys’ questions today! Thank you all for your support, and for the well-wishing, and I hope you enjoy my answers! So, without any further ado, let’s jump right in, shall we?

@karandi, this is a great question! The most important part of a story, eh? Honestly, for me, I’d have to say that’s the characters. I’ve frequently found myself loving a show that, while having a nonsense or nonexistent plot, is still made interesting and enjoyable through fun and dynamic character interactions, not to mention well-written, interesting, and relatable characters, while a story with an interesting plot but bland characters often gets very boring. If you don’t like the characters who drive the story, why bother taking part in the story at all?

Obviously this is probably an overgeneralization of things, but that’s what i’ve observed in many cases.

It’s lovely to see you here, @remy-nii! I honestly don’t think there’s one specific character archetype that I really dislike. I think that every character archetype has a positive and a negative aspect to them, which can be enhanced through writing to make either an interesting or an awful character.

If I had to pick one, though, it’d probably have to be the Self-Insert character. You know, the bland, flavorless characters that are generic and average, made to enable people to project their own worthlessness onto them, and then somehow actually accomplish something. Most of the time, it feels like lazy character writing, like they weren’t willing to try to give the character a life of their own, so they just try to let their audience do it for them. I always find those characters kind of bland and shallow.

Well, personally, i’m a Rat, but i’ve always wanted to be a Dragon. I mean, c’mon. dragons are pretty freaking awesome. Who wouldn’t want to be a giant flying lizard with fire breath? Thanks for the question, @moyatori!

Well, @auri, I’ve always had an adoration for Shonen manga and anime. There’s just something about them that warm the heart and inspire the soul, and no man can turn down a good action story. That being said, whenever I write something, it always ends up being extremely dark and somewhat depressing, usually with a lot of death involved, so if I were to write an anime, it’d most likely end up being a Seinen fantasy.

Denyuuden is a pretty good example of how something I might write would end up. If only I was able to write half as well as Takaya Kagami, I might actually give that a shot!

Oh, @keiko, this is a marvelous question, and one that i’m not sure I have a straight answer for. In all honesty, there are quite a few anime that i’d like to change the ending for, including Tokyo Ghoul, even though i’m not even that big a fan of TG. I would continue on to mention Akame Ga Kill as well, as both shows had an ending that was much better in the manga, though I like Akame far more.

Top of my list, though, has got to be Death Note. I despise the ending of Death Note (season 2) and I always tell people to only watch season 1, and it gives a better ending anyway. The cliche was just too stupid, and honestly… Kira deserved to win.

Honestly, I think my dream collab has already happened, in a way. I’ve always liked stuff like streaming, so being able to do a live podcast with other anibloggers was like a dream come true. Unfortunately we’ve had to take a few weeks off due to several of us (myself included) in the middle of travelling, but we’ll be getting back to it soon enough.

I’d love to be able to include more and more bloggers though, get a wide variety of opinions and interests that changes every week. And of course, you’re always invited, @aria!

I’m honestly not a huge watcher of zombie movies, but I think my favorite that i’ve seen is I Am Legend. Will Smith is a fantastic actor, and his performance in that movie was top-notch. The zombies were actually powerful and menacing, and the whole thing was just really well-put-together.

I honestly think i’d do pretty well in a zombie apocalypse. You’re always welcome to come hunker down at my place, @smiles. I’ve got lots, and lots, of guns.

I appreciate this question, @leap. Moe is an interesting word, and I haven’t really thought to give it a definition before, but here goes. I guess, to me, Moe is a force that captures and tugs at a persons heartstrings, but in a positive way. It’s like a mysterious force that makes you want to go “awwww” or squeal in joy, because of the pure overdose of adorableness that has just been injected directly into your brainular region.

Basically, it’s brainwashing that we are totally ok with.

I did indeed have a magical girl phase, @tpab, and i’m still looking forward to marathoning some mahou shojou with you at some point. I think what really drew me in to Shugo Chara was the main character, Amu. I’ve always been relatively shy and had a tough time expressing myself socially, so her character really resonated with me. It’s a story of being able to break out of your shell (both literally and figuratively) and that message really spoke to me when I first watched the show. Magical Girl shows are really good at that, taking character traits of people and showing how you can improve and be better, and that actually helped me get through some hard times in my life, back in the day.

Granted… it’s been like 8 years since I first saw it, so i have no idea how my opinion may have changed in that time. I’d have to rewatch it to really know.

Oh, @arthifis, you”ve opened a can of worms here. Please don’t lynch me for saying this, but… One Piece. I’ve read some of the manga, and it was decent, but I honestly can’t stand the Anime, and I can’t really comprehend why there’s so much hype about it, or even how it got so many episodes.

Luffy is annoying, his voice is grating in both the sub and dub, the pacing is weird, and it’s just generally a turnoff for me. I’ll probably end up trying to experience One Piece in full at some point in my life, but if I do, it’s going to be through the Manga, because I literally cannot stand the Anime.

Thank you all again for all the awesome questions, and for supporting my blog! Next goal is 200 followers; please let me know if you have any fun ideas for me to do for the next milestone!