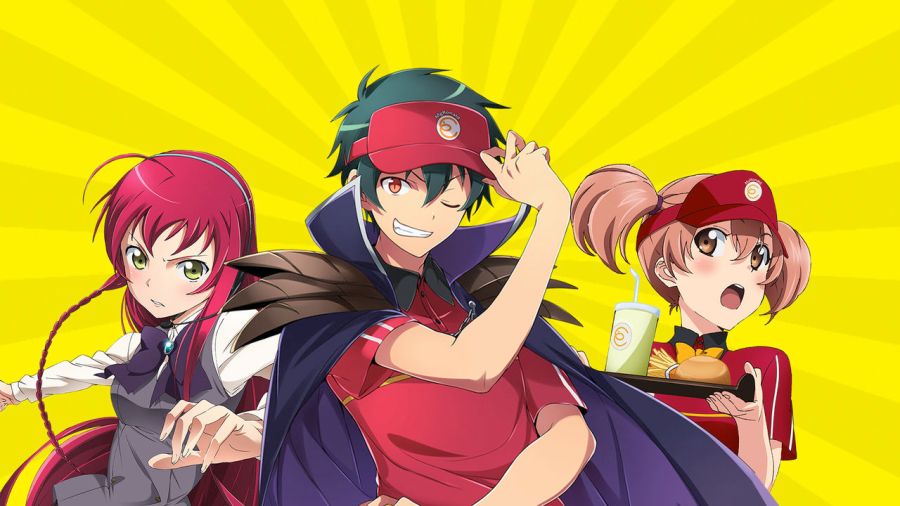 It’s been a few weeks, but Pocket Picks are still a thing, guys! I promise! Our Pocket Picks today features a show that I haven’t really thought about in a while, but recently, along with the topic suggestion of the lovely MagicConan14, master of the Animanga Spellbook, I read the latest volume of the light novel for The Devil is a Part Timer, and realized that it’s just what i’ve been looking for to feature on this series.

Striking fear into the hearts of mortals, the Demon Lord Satan begins to conquer the land of Ente Isla with his vast demon armies. However, while embarking on this brutal quest to take over the continent, his efforts are foiled by the hero Emilia, forcing Satan to make his swift retreat through a dimensional portal only to land in the human world. Along with his loyal general Alsiel, the demon finds himself stranded in modern-day Tokyo and vows to return and complete his subjugation of Ente Isla—that is, if they can find a way back!

Powerless in a world without magic, Satan assumes the guise of a human named Sadao Maou and begins working at MgRonald’s—a local fast-food restaurant—to make ends meet. He soon realizes that his goal of conquering Ente Isla is just not enough as he grows determined to climb the corporate ladder and become the ruler of Earth, one satisfied customer at a time!

On a first look, The Devil is a Part-Timer seems like your standard pseudo-fantasy comedy show with some harem aspects. However, i’m here to say that there’s a lot more to the show than might seem evident from just a glance. When the Demon Lord Satan is warped from Ente Isla to modern Japan, he is forced to act as a human, to integrate into their society and learn about them. When the hero follows him to Japan, she discovers that Satan has changed his name to Sadao Maou and works at a cheap burger joint for minimum wage.

You can guess, then, the hilarity of the situations that ensue, as Maou and Emilia struggle to resolve their differences, fit into the modern world, and deal with the variety of angels and oddities that follow them to Earth. Relying on quite a few standard tropes, the show manages to express them in unique and interesting ways that stay interesting throughout the whole show.

With a large cast of characters, a lot of the focus obviously falls to them. The cast is colorful and diverse, every character is unique, interesting, and very well-written. It’s easy to get attached to the core cast, but the supporting cast is no slouch, either, keeping the show running smoothly from beginning to end.

The visuals are pretty nice, too; the show definitely rates on the higher end of shows. Especially for something that aired back in 2013, it still looks quite nice. Especially nice looking are the few battle scenes we get throughout the show, though the battles are a smaller part of the focus of the show, as the focus is mainly on the characters and their scenarios.

One thing that really makes the show feel special, at least to me, goes hand in hand with the focus on characters. With a solid focus on friends and family, The Devil is a Part-Timer delivers a surprisingly deep and heartfelt story, between Emilia’s moral struggle, the growing relationships between devils and humans, and above all, the secrets behind the true nature of the kindhearted Demon King.

Don’t just take my word for it, though. Here’s what a few other bloggers have to say about the show:

It’s a hilarious series that knows how to play with tone and comedic timing. Hopefully you don’t mind overly spiteful and petty tsunderes since the main female protagonist has been portrayed as one due to the studio’s ship preferences.

If you’ve seen The Devil is a Part Timer, feel free to share your love for it! And if you haven’t, I hope this post goes a ways toward convincing you that you need to, because it’s a great show!