Back with my girls for more silliness, as the game is approaching it’s final stages. And we get even more of what this show is so good at; real-life struggles disguised under adorable moe-ness. Naru and Nene are still working on their minigames, and Naru continues to flaunt her experience and skill over Nene. When Naru submits her minigame to Hajime for playtesting, Hajime requests a variety of spec changes, causing some scheduling delays to occur, which frustrates Naru.

Nene, trying to be helpful, points out some bugs in Naru’s code, to which Naru reacts in a quite rude fashion. Nene steps out to take a breather, and ends up chatting with Momo, who tells her why Naru is so motivated to be a programmer. After Naru’s buggy code is discovered, causing delays to the whole game, Nene offers her help in debugging and fixing the code, finally causing the uptight Naru to relax, and they become friends. 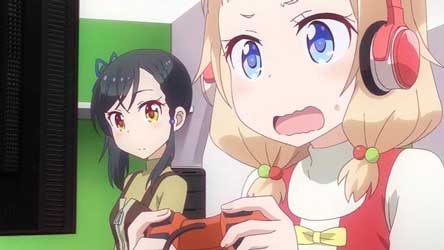 Nene is, in my opinion, becoming one of the best characters in the show. Her boisterousness and general childishness is offset by a surprisingly hardworking attitude and lots of self-confidence, even when so many people have told her that she can’t do something. The way she can set her mind to something and accomplish it, while still uplifting those around her, makes her a great character.

Episode 11 begins, and the release of the game is growing near. The crew is excited for their first full playtest of the game, and everyone is excited o see the results of their hard work. However, even as Ko puts in an effort to be nicer and more invested in the rest of the 3D team, Rin overhears her talking to Christina about leaving Eagle Jump, to go work at another company.

This leaves us with quite a few questions. Why is Ko leaving? What will happen to Eagle Jump once she jumps ship? It seems like she has some complex feelings running through her head, but we aren’t sure yet why anything is happening the way it is. I hope that the next episodes are enough to explain what’s going on, and wrap up the show in a decent fashion, because otherwise, i’ll be quite upset.