I have, i’m sorry to say, a small complaint that is starting to bug me, about this show. I’ve read I think 5 volumes of the Light Novels now, and while they are still keeping me entertained, the show is starting to wear a bit thin on me. It just feels like the novels have somewhat better pacing, better writing, and to be honest, the fight scenes in the anime are almost too relaxed, too toned down. I know these are silly things to be complaining about, but I really mean them. I mean, look at these last few episodes.

Episode 6 starts out with Touya and co. having just moved into their new house. Suddenly the duke shows up, with a request to escort the Mismedian ambassador, Olga, back to her home country, to facilitate negotiations. The trip is basically uneventful until all of a sudden, a dragon shows up. Even after the dragon appears, though, there’s not really any threat, as Touya handles things easily, defeating the beast and saving the village. It’s not really the godmode thing that made the fight boring, though, it was really just badly choreographed, and was just anticlimatic. And that’s not even the worst of it.

Episode 7 gives us the whole deal with the kids in Mismede itself. First off, they go to meet the King of Mismede, who, after hearing of Touya’s feat of defeating a dragon, decides he wants to fight Touya himself. Of course, Touya wipes the floor with him, and the fight ends quickly. Touya then decides to make a new weapon to replace his katana, which just so happens to be a gunblade, for whatever reason? Afterwards, they do some stuff in town that’s not particularly relevant to the story. Then, to top off the episode, Touya meets Leen and Paula, an ancient fairy and her stuffed teddy bear companion. 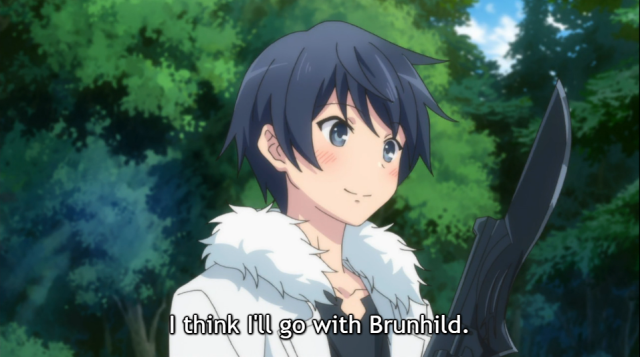 This episode just felt like a clutter of small stories rather than a complete episode. The pacing is kind of off, and i’m not entirely sure why that actually is. Maybe it’s part of how they are trying to fit so much of the LN content into each episode? It’s still a pretty good show, and I do like the novels, so I probably won’t drop it, but these are my concerns for the show going forward, I hope it gets a bit better.