This show always manages to surprise me. It fools you into thinking that it’s just all about these cute girls and their adorable antics, and the BAM, they hit you with a fantastically written scene that hits close to home for many of us. In Episode 6, Nene has finally finished her game, and is excited to show it to Hotaru and Aoba. However, she’s super nervous about what their reactions might be, and keeps panicking. However, both Hotaru and Aoba love the game, and get super into playing it, giving Nene a big confidence booster. 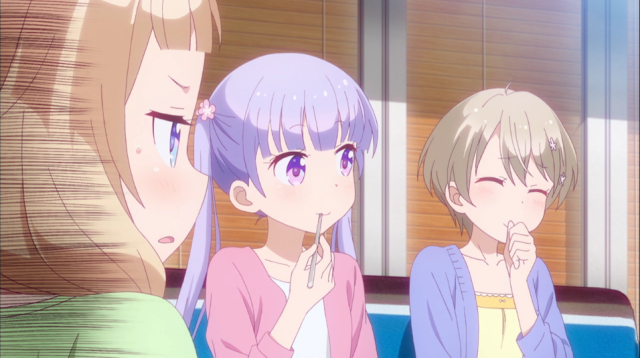 Aoba, on the other hand, has been feeling pressure upon the prospect of drawing the key artwork for the game, until the lady from the promotional company informs them that they want Ko to do the key artwork, not Aoba. Of course, this frustrates Aoba, and she works hard to compete with Ko, even though she knows they won’t use her art from the get-go. Even after trying her hardest, and still coming up short of Ko’s wealth of both talent and sheer experience, Aoba manages to tough through things, and Ko makes sure to let everyone know that she respects Aoba, and believes that they stand on the same playing field.

The above line is just such a great one, I couldn’t help but include it. Anyways, finally, it’s time to hire some new peeps to work at Eagle Jump, and at the start of Episode 8, Aoba gets to sit in on one of the interviews with Umiko. Of course, the person being interviewed is Nene, but mainly just because Umiko wanted to see how she could comport herself in a professional setting. Though her experience is lacking, Umiko likes Nene’s ambition and her ability to pick up on things quickly, telling her that she believes in, and has high hopes for her. 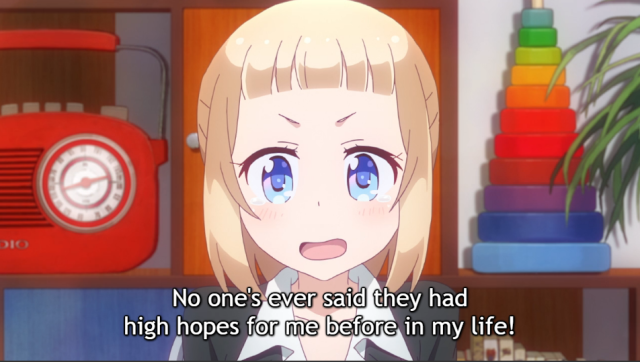 There’s a couple new hires as well, one of them coming to work in the character department. Momo is the same age as Aoba, and is maybe even more fanatical about Ko than Aoba was at the beginning. After hearing that Aoba, not Ko, is the lead character designer for the game, Momo’s competitive switch flips, but she’s so dang awkward that it just ends up spiralling into disaster after disaster for her.

We’ve all had hopes, and dreams, at one point in our lives, and it hurts when someone else is just… better than us. It really, really hurts. But being able to move past that pain, and make that person acknowledge you, is a skill that many people lack. Being told to step aside, that you’re not good enough, or being told by people that you don’t really have potential, is really tough. I think that’s why this show resonates with so many people. Whether it’s Nene, finally having someone to believe in her, or Aoba, frantically trying to reach the pinnacle that is Ko, this show has some great moments. And some super cute girls.