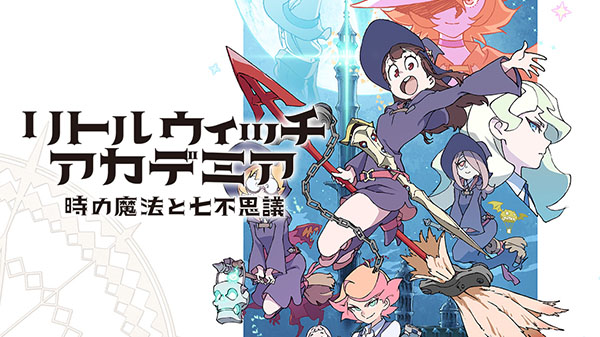 Many of you may be familiar with this show, at least to some degree. Written by Michiru Shimada, Directed by Yoh Yoshinari, and produced by Studio Trigger, Little Witch Academia originated as a short film for Anime Mirai 2013. The show gathered an immense amount of support around it, and when Trigger announced they were making a second film in 2015, and launched a Kickstarter campaign, with a goal of $150,000. They ended up raising over $600,000 and made the new film twice as long as they were planning. Now, in 2017, they finally gave us a full, 25-episode television series.

The story revolves around Atsuko Kagari (Akko), a young Japanese girl with no magical talent whose greatest wish has always been to be a witch like her idol, Shiny Chariot. Through hard work, she manages to get into the prestigious magical academy of Luna Nova, where she hopes to become a proper witch. Through a series of unfortunate events on her way to Luna Nova, however, Akko meets her to-be best friends, Lotte Jansson, the shy bookworm whose skill in spirit magic is unrivaled, and Sucy Manbavaran, a witch who loves to experiment with potions and poisons.

As the three young witches are mysteriously transported to Arcturus Forest, they become embroiled in a fight against a Cockatrice, a giant chicken monster that breathes a petrifying gas. There, Akko finds the Shiny Rod, the magical staff of immense power that Chariot used to use. With its power, Akko and the others are able to safely make it back to Luna Nova, with a little help from Ursula, one of the Luna Nova teachers.

Akko’s days at Luna Nova are rough, partly due to her complete lack of magical ability, and partly due to the poor treatment she receives from not only many of the teachers at the school, but also from fellow students who tease and torment her for her lack of magical ability. Heck, she can’t even fly on a broom, let alone use any truly powerful magic. However, Akko shows incredible determination, never giving up and always working her hardest to accomplish her goal.

As Akko struggles with her magical talents, she also struggles to cope with the fact that the majority of the magical world openly rejects and reviles Shiny Chariot. Nonetheless, Akko pursues her goal of meeting Chariot, trying her best to follow in the footsteps of her idol. While this does usually result in Akko getting into lots of trouble, she also begins to unlock the secrets of the Shiny Rod, with the help of Ursula. Though she’s not terribly bright, Akko might have a chance at becoming a witch such as the world has never before seen.

I personally adore Little Witch Academia. It feels so fresh, so new, and it’s so unbelievably well-put-together that it’s quickly jumped to stand among my very favorite shows of all time. So, without any further delay, let’s break it down.

Art: The art in this show stands out very well among other shows. It’s a bit different than you might be used to, but it’s beautiful nonetheless. The colors are vivid and bright, and the designs of everything are well-made and intricately detailed. 5/5

Animation: Little Witch Academia has amazing animation, as one might expect from Trigger. Everything moves with such fluidity, and nothing is ever choppy or incomplete. You really won’t find much better animation anywhere, so this gets a 5/5

Music: Oh boy, does this show have good music. The soundtrack is wonderful, an absolute delight to listen to. Each track always is spot-on to best accentuate each scene, and the composition of each track is just exquisite. The OP’s and ED’s are all extremely wonderful, with the season 2 ending theme now being my favorite of all time. 5/5

Characters: Shows with a large cast to manage generally tend to make a hash of it, but LWA does it beautifully. Akko, Lotte, and Sucy are, of course, extremely well-written, but so are Diana, Amanda, Andrew, and the rest of the cast, including students, teachers, villains, and other random characters that only show up occasionally. It’s hard to find character writing this well-done, so I award a 5/5

Character Development: With a large cast, we get to see character development happening for a large number of characters. And LWA does this with an extreme amount of skill. The development points are always well-timed and never feel out of place, and the characters themselves are all so loveable that we become emotionally invested in their growth, which is a wonderful thing. 5/5

Worldbuilding: From the beginning of the show, there are so many mysteries that need answering. Why does the moon have a giant crater in it? Why is magic on the decline? Why do witches exist, and why is their existence open to the public? And Trigger manages to answer all these things tidily by the end of the show. Of course, we don’t get to see a whole lot of the world outside of the magical world, but that doesn’t really matter, because as the viewer, we don’t really care that much. 5/5

Genre: Fantasy? I’m not sure what other genres could be applicable to this show. It doesn’t really have any rules constraining it, yet it doesn’t feel confined or wildly loose, either. 5/5

Tropes: Little Witch Academia is like a breath of fresh air. It doesn’t just ignore all the typical anime tropes, it completely voids the possibility of them even existing within its universe. It feels so fresh, so clean, that it’s impossible to give anything but a 5/5.

Personality: As was stated earlier, LWA feel super fresh, super unique. I can’t really think of anything to compare it to, to be honest. It’s got personality in spades, and definitely deserves more attention. 5/5

Plot: LWA has a great plot, it’s very well thought-out and organized. There are tons of little plot pointers you might see in the background in an episode, that suddenly becomes a big deal later on. It’s well written and complete, with no real hanging tangents or glaring problems. While it’s not the most complex plot, it’s been perfectly executed for what it is. 5/5

Pacing: This show has great pacing. I personally never wished for it to speed up or slow down, and it kept me entertained to the end. There are some times when it feels slightly disjointed, but it all comes back together in the end to make a full picture. 5/5

Personal Opinion: All in all, Little Witch Academia is one of the best animes that I personally have ever seen. It was captivation and interesting from the start, was extremely well-made, and kept me totally invested in the story until the end. To me, this show was a total masterpiece. 5/5

Looking back through all the scores, it’s pretty easy to see where this is going. Little Witch Academia gets a score of:

Studio Trigger did such an excellent job with LWA. It did nearly everything right for me, and did such a small amount of things wrong that it’s basically negligible. Though Kill la Kill wasn’t a big hit with me, Kiznaiver, Space Patrol Luluco, and now Little Witch Academia have been consistently doing things very very correctly. If Trigger can stay consistent in what they are doing, we’re in for some very good shows in the future as well.

I highly recommend Little Witch Academia. While it’s not perfect, it is a wonderful show that can be enjoyed either as a binge-watch, or by watching it little by little. And it’s totally family-friendly, so anyone can watch it! Just remember, a believing heart is your magic!

Thank you everyone so much for reading. If you liked this review, or if there’s anything you thing I should watch or review in the future, please don’t hesitate to leave a comment below! Remember to follow if you want to see more in the future, and I hope to see you all again!