When Attack on Titan first aired in 2013, it took the anime community by storm. Mass amounts of blood and gore, beautiful animation, intense action sequences, and a soundtrack by the brilliant Hiroyuki Sawano made it an instant hit with millions of people around the world. It was widely praised as one of the best anime series around, but is that really true? Let’s take a look.

Attack on Titan follows main character Eren Jaeger and his two best friends: Mikasa Ackerman and Armin Arlert, and is apparently set something like 2000 years in the future. The world has been overrun by giant monsters known as the Titans, and humanity has retreated behind a series of three walls: Wall Maria, Wall Rose, and Wall Sina. The story begins the day Wall Maria is breached by the Colossal Titan, a titan standing over 60 meters tall, more than 10 times the size of a normal titan. During the attack, Eren sees his mother eaten by a titan, before fleeing the city with Mikasa and Armin. Several years later, the three of them join the army to be trained to fight titans. Eren swears revenge on his mother, declaring he will kill all of the titans.

The show devolves from there into enormous amounts of bloodshed, lots of people getting eaten in increasingly gruesome ways as, after finishing their training, Eren, Armin, and Mikasa, along with a nice crew of named expendables, are suddenly pressed to defend Wall Rose after the Colossal Titan strikes yet again, punching a hole in the wall and letting titans invade Trost, a district on the edge of Wall Rose. Many named expendables die in this disaster, including Eren… Wait no actually he’s suddenly a titan!

Ah, yes, a terrific philosophical tale, where the hero becomes the very monster he had sworn to destroy… No, wait, let’s be real here. It’s to look cool. I mean who doesn’t like to see giant monsters fighting each other? What more can i say about the show without any more spoilers than I’ve already given out? As i’m not sure, i’ll jump straight into the review. 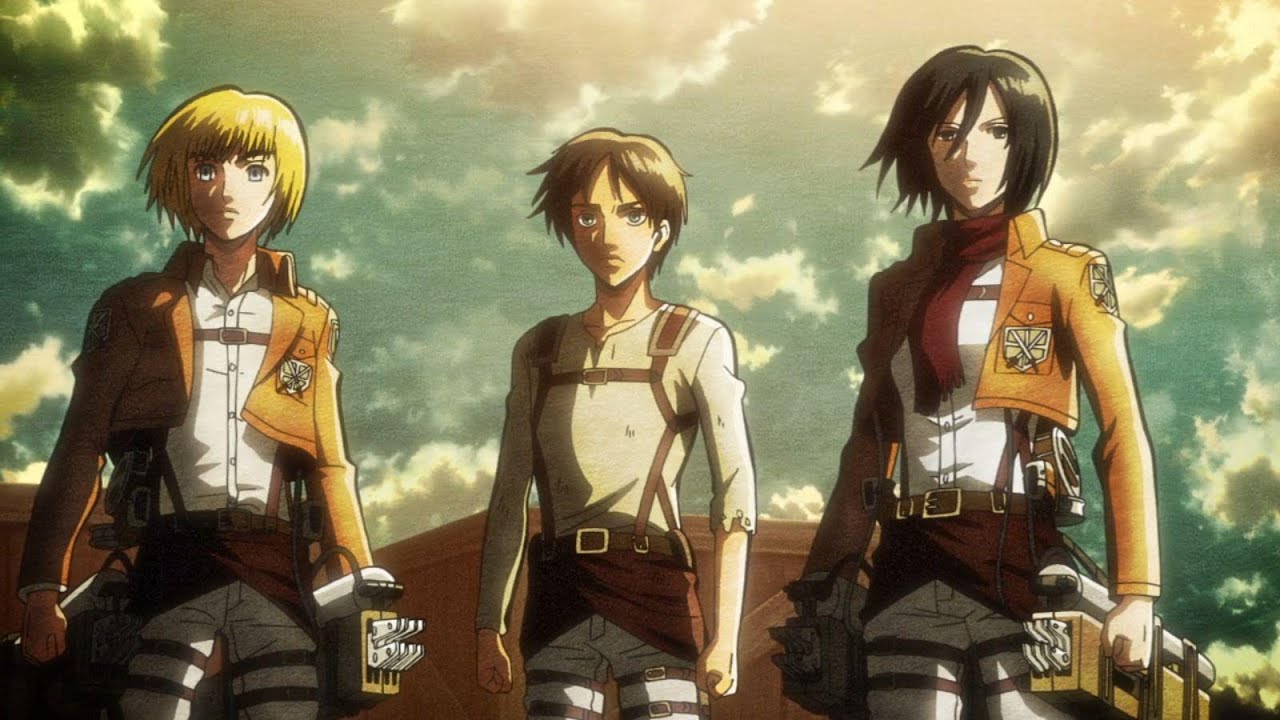 Art: Attack on Titan has some beautiful artwork to it. It’s clear to see that the studio put a lot of time and effort into making the show, so the quality is very high. It’s nice to see such attention put into small details of a show, like clothes and buckles and such. 5/5

Animation: Just like the artwork, the animation is done extremely well. It’s smooth and fluid and totally awesome, making for some of the best action sequences I’ve seen in any anime. 5/5 (let’s not talk about the disgusting CG for the Colossal Titan in season 2, ok?)

Music: It’s a Hiroyuki Sawano soundtrack!!! I mean, that basically guarantees that it’s amazing. It hypes at just the right hype times, and it hypes everywhere else too. Plus, you can’t forget the catchiest OP ever for Season 1. 5/5 YAEEEEGERRRRR!

Characters: Unfortunately, the characters in this show fall pretty flat. With a big cast of characters, it’s understandably hard to make them all interesting, but so many of them are really exactly what I called them earlier: named expendables. Little character and even less screen time. Until they get eaten, that is. 3/5

Character Development: Ohhh boy. There’s one thing I dislike even more than when side characters don’t get any meaningful character development, and that’s when the character development is just… like… half-done. Like they threw together some soggy mush of a backstory and tried to slap each one on a different character. The three mains get it a little better but it’s still painful. 2/5

Worldbuilding: The world of Attack on Titan is pretty distinct and inventive, for all its faults. What really lies beyond the walls is kept a total mystery for a very long time, and I appreciate that. There’s some details that are a bit fuzzy, but overall you can tell that the author crafted his world with care. 5/5

Genre: Attack on Titan is noted as Dark Fantasy and Post-Apocalyptic. It definitely fits both of those molds quite well. Action fits it like a glove as well. 5/5

Tropes: Attack on Titan does a good job of staying away from harmful tropes to keep to it’s “dark” setting. There’s a few tropes it can’t like without, like the fact that the Main Character is basically invincible, holds the key to the survival of humanity, etc. But that’s forgivable as it helps add to the plot. 5/5

Personality: Attack on Titan got tons of hype when it released, and for good reason. With the stunning visuals, epic soundtrack, and excessive violence in a relatively tame season, it sure stuck out like a sore thumb. 5/5

Plot: Now what i’m about to say might anger a great many people but… I think that the plot of Attack on Titan is rather stupid. There’s too much shouting, too little character development and a near-complete lack of emotional depth. The mystery of the titans is somewhat interesting, but I think the plot is actually one of the weakest parts of the show. 2/5

Pacing: Time skips. Attack on Titan loves to use time skips. This is a tool that writers use to help advance a plot, but overuse of it causes us to miss out on huge chunks of character development and storybuilding. After a time skip we usually get ~10 episodes of about one day’s worth of time. It’s not as bad when you’re watching it because the content is so exciting, but it could definitely use some work. 4/5

Personal Opinion: Personally, I have mixed feelings about Attack on Titan. It’s exciting, sure. Entertaining, definitely. But is Attack on Titan actually GOOD? Well… I don’t think it is. There’s much better options out there in terms of total balance of a show. It’s not really BAD either, though. 3/5

Whoo, we’re done. Attack on Titan, the popular anime that everyone loves. Let’s hope I don’t actually get eaten by the angry fans after posting this. The final score is:

If you decide to watch this show, I would recommend binge watching. Don’t miss a second of that delicious action. And don’t take it too seriously, just enjoy yourself!