Oh boy, here’s a good one. Thanks to @theringhasawoken for suggesting this one. Ghost in the Shell is a large franchise consisting of several animated movies, several different animated TV series, a handful of video games, and now a live-action version starring Scarlett Johansson. For the sake of simplicity, we’re going to exclude the live-action adaptation for this review. We’re also excluding the video games. So, this review will consist partially of the original movies, but mainly of Stand Alone Complex, which is the main meat of the series.

Ghost in the Shell first appeared in 1995 as a feature-length animated film. Right off the bat it was considered unique, due to it’s relatively mature content, and dense story, and was based on the manga written by Masamune Shirow that serialized between May 1989 and November 1990. Stand Alone Complex began airing as a 26-episode series in the fall seasonof 2002, and was followed by Stand Alone Complex: 2nd GIG in the winter season of 2004, containing another 26 episodes.

Ghost in the Shell follows a private government anti-terrorist division called Section 9 as they fight crime and terrorist with guns, knives, fists, and a lot of hacking. Set in Year 2030 Japan, the world of Ghost in the Shell is a utopian/dystopian society where a major portion of the world’s population has undergone cyberization to some extent. Cyberization is exactly what it sounds like: the replacement of human body parts with mechanical, cyborg parts. In some cases, everything gets replaced apart from the brain. While this does make for many wonderful advancements in the fields of medicine, as they can replace lost limbs and cure paralysis, it also opens up some very terrifying, and real, possibilities.

Ghost in the Shell is widely applauded as a visionary show, showing us in an interesting and engaging way what can become of an over-reliance on technology. Yes, it could be pretty cool to have your brain linked up to the world wide web so you could surf, make calls, store and access data, etc whenever you want, without any bulky peripherals. But what would happen if a hacker hacked his way into your brain? Could they control you? could they steal sensitive information? Could they alter your memory? maybe they could even cause a short-circuit and just kill you instantly. In 2017, as the internet is becoming more and more widely-used, and people have gained such an intense reliance on computers, phones, etc… Going back and watching this show really makes you think.

The main character in Ghost in the Shell is Motoko Kusanagi, more commonly known as just The Major. She is an elite combat operative, skilled in martial arts, firearms, detective work, and hacking, and is the second-in-command of Section 9, as well as a full-body cyborg, the only human part of her left being her brain. other members of Section 9 include: Batou, a muscle-bound strongarm of a cyborg, who used to belong to the Rangers, whose combat skills easily rival those of the Major. Togusa, the only full human on the team, is a master detective scouted from the police force, as well as a family man. While not nearly as adept at combat as many of the other investigators, Togusa has a distinguished service record, and has proven a key member many times by being immune to cyberattacks. Ishikawa is the team’s cyber warfare specialist, rocks a mighty epic beard, and, while he tends to fight from the rear, is an indispensable asset to the team. Saitou is a sniper with a cybernetic eye, allowing him to provide long-range backup and tactical support. Borma is their bomb and explosives specialist; he knows how to set them up as well as defuse them. He also serves as a jack-of-all-trades man, filling any position he needs to fill. Paz is the team’s infiltration specialist, using his skills to gather information and sneak behind enemy lines. 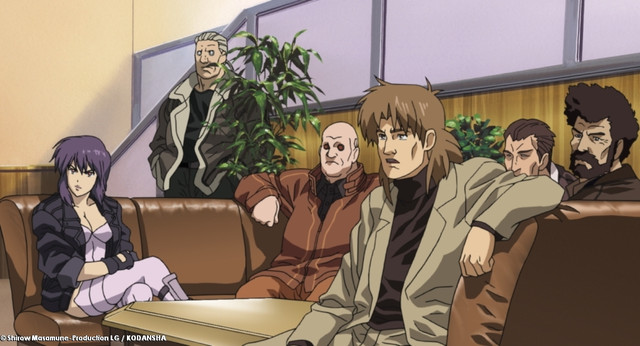 With such a great cast of characters and such a wonderful theme, the show can’t help but be amazing. It’s definitely something that I would recommend everyone watch.

Art: Being an older show, the art of Ghost in the Shell might not appeal to everyone, yet I would say that it’s aged rather well, though not quite as well as some other shows released in about the same era. 4/5

Animation: The animation for Ghost in the Shell is spot on, all the time. Crisp, clean action sequences are aplenty, and it’s more than enough to get a 5/5

Music: Ghost in the Shell has the kind of soundtrack that you don’t really notice while watching it. Not to say it’s forgettable, more that it’s a part of the background, quietly working to enhance each scene. I feel like tracks like this are very important to have, so i give it a 5/5

Characters: The cast of Ghost in the Shell is an amazing cast of characters, as I outlined above. They each have their own backstories and solidly set character slates, and for that I give them 5/5

Character Development: With such a large cast of characters, it becomes rather hard to give them all meaningful character development while still devoting most of the show to the main theme and the story, so the Major is the only character who gets extensively developed over the course of the show. But the show does a good job of giving each of the main characters some love here and there, so i’ll give it a 4/5

Worldbuilding: What more can I say about the world of Ghost in the Shell than I mentioned above? It’s amazing, exceptionally good. It really stands out as a world that has been truly fleshed out, down to the smallest details like politics, money flow, international powers, bureaucracy, etc. A world like this, that defies the ordinary and moves past the boundaries must have the highest score. So I give it a score of 5/5

Genre: What really is the true genre classification of Ghost in the Shell? Is it Cyberpunk? Action? Sci-Fi? Drama? I don’t really know how to best classify it. So maybe it’s a show that transcends genres? Or maybe it’s more of an Enigma? 5/5

Personality: We’e already covered why Ghost in the Shell is such a standout show, but i’ll summarize here. It has a brilliant idea that is considered by many to approach genius. Not only that but the foreshadowing of our society’s direction is both beautiful and terrifying. 5/5

Plot: In my opinion, Ghost in the Shell is actually not a very plot-heavy show. The plot takes a subtle untertone, slowly building itself up in the background while we see the members of Section 9 doing what they do best: taking out criminals, terrorists, hackers, and other such nasty types. This way, when the plot does finally kick in, you get that big moment where all the little plot points that had been dropped subtly the past 20 episodes all click together, and you have to scrape your brain off the back wall. 5/5

Pacing: For an action show, Ghost in the Shell has extremely slow pacing. It really takes its time to build up the story, and, apart from a few places where it seems a bit dull, the pacing is just right for the type of story it is telling. 4/5

A truly amazing score for an amazing show. My recommendation for watching Ghost in the Shell is to watch it bit by bit, a few episodes at a time. This gives you time in between to digest and process what you have watched, to really let it all sink in.