Oh, no, here comes another addition to the totally overused trapped-in-a-fantasy-world genre. Except it’s really not, is the thing. Grimgar is a very stand-out piece in a totally overused genre, and is one of my personal favorite shows from this genre as well. Having read the manga and the light novels as far as they’ve been published, I know a great deal about the story, but i’ll stick to reviewing only the anime here.

Grimgar follows a character called Haruhiro, and a group of his friends, as they try to survive in a fantasy world called Grimgar. They, along with several other teens, were brought to Grimgar from Japan by unknown means for an unknown reason. But they don’t really know this, as they have lost their memories of their lives previous to Grimgar. Well, not TOTALLY lost, more like it’s all trapped under a haze of very dense fog. They can randomly recall various bits and pieces, for instance they know the word “cell phone” but they don’t actually understand what it means. 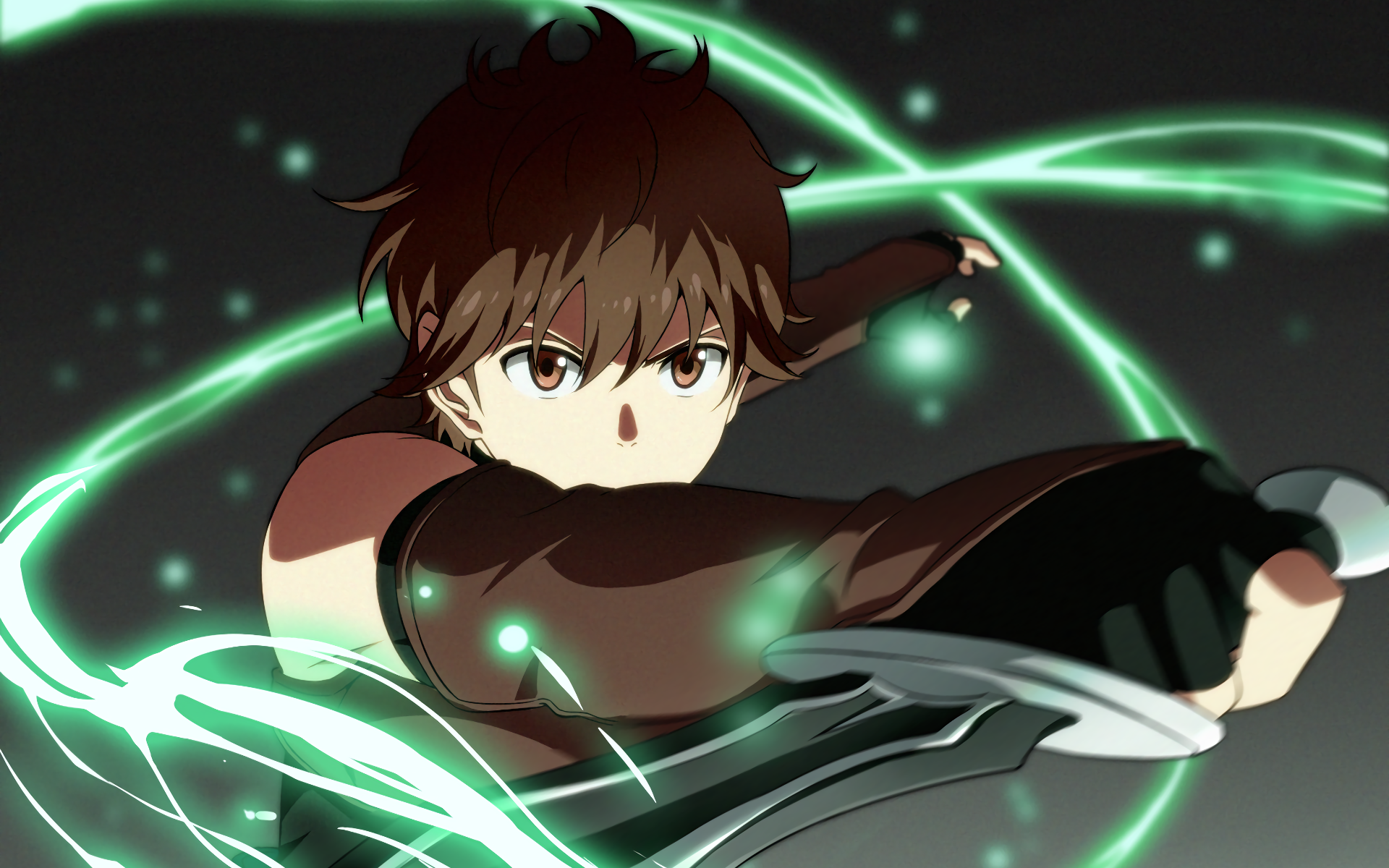 The world of Grimgar is a very down-to-earth place. Everything is bound by rules, and the rules are very hard to break. Haruhiro and his friends learn very quickly that they have no special powers, no “OP abilities” that you see so often in these sorts of stories. They are very normal, maybe even weaker than normal. After all, you can’t expect a teenager to all of a sudden be able to pick up a sword and start killing goblins right away.

The characters in this story are very human, they react in ways you’d expect a human to react. They are bound by human limitations. They laugh, they cry, they have lives outside of the battlefield. They love, they hurt, and they form such strong bonds with their teammates that were something to happen, it would feel like the whole world had come crashing down on them.

I don’t want to spoil the show, so if the summary interested you, go watch it. It’s definitely worth your time. Anyways, let’s get down to the review.

Art: Grimgar is characterized by the contrast between the tastefully drawn characters and the beautifully illustrated pastel backgrounds. The two come together in such a striking way that it makes the world itself feel that much more interesting. 5/5

Animation: Grimgar’s animation is very different from a lot of shows in that, instead of showcasing big, flashy colors and special attacks, it showcases just how accurately they can make the characters feel to regular people. The movement is very natural, and exceedingly human. 5/5

Music: Oh, how I love this show’s soundtrack. The composition that went into each piece is evident, and it works together so well with the art and the story to create a truly wonderful experience. 5/5

Characters: Oh, boy. The characters. Grimgar is a world filled with many people, and we do get to meet quite a few, but the main story follows Haruhiro and his six friends: Manato, Yume, Shihoru, Ranta, Moguzo, and Merry. These characters, and their interactions, are one of the things that really make this show incredible. Haruhiro and Ranta’s silly banter, Moguzo’s quiet strength, Shihoru’s shy determination… They all come together to create some truly beautiful character interactions. 5/5

Character Development: Unfortunately, due to the limitations of an Anime, we don’t get as much character development in the show as we do in the Light Novels. However, there still is quite a bit. Merry in particular has some incredibly touching backstory and character development happen in the anime. 4/5

Worldbuilding: In the anime, and in the Light Novels so far, all we’ve really seen of the world itself is the city of Altana, and the surrounding area. That being said, Altana has been so beautifully crafted, it feels like a living, breathing thing. From the lively Sherry’s tavern to the quaint but cozy quarters of the Red Moon barracks, the world feels very familiar, very lived-in. And that is a beautiful thing. 5/5

Genre: Grimgar is labelled as a Fantasy. Which it definitely is. While there are no elves, dwarves, catfolk, etc, Magic exists, and so do Monsters. The world is beautiful, strange, bright, and eerie at times. 5/5

Tropes: Unfortunately, Grimgar falls victim to a few of the classic Anime tropes. And while some of them not only help the story, but help us understand the characters themselves, other times it feels a little bit forced, like it was just thrown in there for amusement. 3/5

Personality: Grimgar is a show that quietly released alongside big titles like Erased, KONOSUBA, Assassination Classroom, and Gate, back in Winter 2016. And it kind of got lost among the giants. Yet I don’t think i’m wrong in saying that actually, Grimgar was the best title that season. It didn’t manage to stand out among its peers when it was released, but when you watch it, you will never forget it. So I award it a 4/5

Plot: Grimgar is a very plot-driven show. The plot is masterfully written, and does such a good job of keeping viewers engaged during both the ups and the downs, that i can give it nothing but a 5/5

Pacing: Grimgar is a show that moves relatively slowly. It takes its time winding up, showing the characters struggling to get stronger, shows their daily lives, and yet the slow pacing never gets boring. It works, for the kind of show that it is. 5/5

Personal Opinion: If you couldn’t already tell where this was heading, you might need your eyes checked. I adore Grimgar. I own all the light novels on Kindle and on Paperback, and i’ve watched the Anime at least 10 times. I can give it nothing but a 5/5.

And now, without further ado, I award Grimgar of Fantasy and Ash:

As far as watching Grimgar is concerned… Watch it however you like. Honestly, it’s good any way you watch it.