I first watched Last exile about 10 years ago. It was the third anime I ever watched, and to this day holds a special place in my heart. I could use flowery words all day, but… let’s get to the real reasons why this show rocks.

This show was made in 2003, and to this day, the art still looks crisp and clean, and genuinely beautiful. Not only that, it was one of the first anime ever to make extensive use of CG, and let’s be real here, the CG in this show looks way better than the CG you’ll find in a great majority of popular shows nowadays. Where in so many shows you see CG and just thing “Ugh, gross” because it doesn’t fit or is just plain disgusting (Berserk 2017 i’m looking at you) the CG in Last Exile is beautifully melded with the Key Animation in a way where it not only fits like a glove, but the show would most likely be worse without it. That’s quality.

Last Exile is set in a steampunk-esque world, where three major factions hold power. Anatoray is a nation that is reminiscent of 19-th century Britain, and Disith is pretty much the equivalent of Russia. The Guild is a supposedly neutral power, but they tend to act on their own interests.

The story follows Claus and Lavie, a pair of young Vanship pilots who have been together since birth, their fathers having also been vanship pilots. On a dangerous mission to use something called the Grand Stream to cross the world and deliver a peace treaty from Anatoray to Disith, both Claus and Lavie’s parents lost their lives. The news was delivered to them by a young man who had just barely escaped with his life, after having lost his lover and navigator to the grand stream as well. Claus and Lavie decide to carry on their father’s legacy, by fixing up their father’s Vanship and becoming pilots themselves. (Claus is the pilot, Lavie is his navigator.)

Living a relatively normal life together, Claus and Lavie manage to make their own way in the world until their lives are turned upside down one day. During a Vanship race, they have a near-collision with an unfamiliar Vanship, which then crashes in the forest. The pilot begs Claus and Lavie to take over his mission, a delivery job with a danger rating of 7 stars. He can no longer continue the mission himself, because his navigator had been killed and his Vanship badly damaged. The cargo turns out to be a young girl named Alvis, or Al for short. While Lavie advises against it, Claus accepts the mission.

While being pursued by a strange star-shaped ship, Claus and Lavie dedicate themselves to delivering Al to the Silvana, a legendary pirate ship nicknamed the Kill-Em-All. After meeting with the captain of the Silvana, Alex Rowe, and realizing that the damage dealt to their Vanship by the Guild Starfish was far too severe for them to fly back home, they reluctantly decide to join the crew of the Silvana. For the sake of spoilers, i’ll stop here.

Last exile is set in a very dark and dreary world, and it does a wonderful job of portraying it as such. However, it’s not all doom and gloom, there’s good all around as well. This show is an excellent example of what you can do with a steampunk-esque setting, and you’ll struggle to find better aerial dogfights in any other anime, in my opinion. While it is an older show, that’s no reason to knock it down any pegs. After all, 2003 was also the birthplace of shows like Ghost in the Shell, Fullmetal Alchemist, Gundam Seed, and more.

I think it’s already pretty obvious that I adore this show. I think it’s amazing, and not just for the nostalgia factor. So it’s time to dig down deep into what makes this show tick. 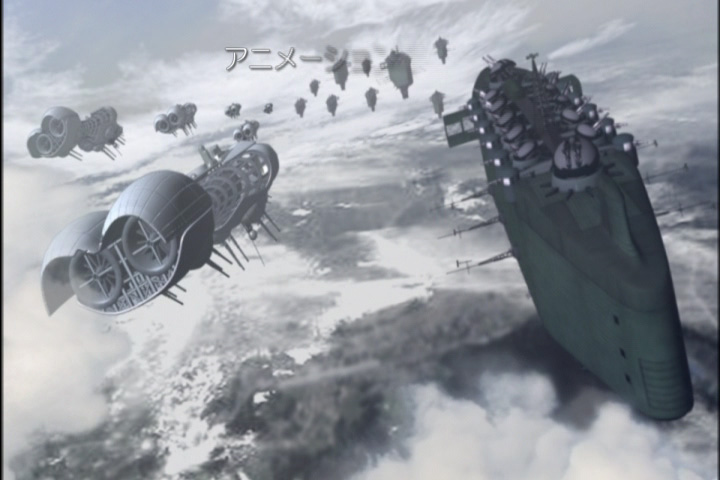 Now for the final tally. Last Exile, one of my personal favorite shows of all time, gets a final grade of:

My personal watching recommendation for Last Exile is binge-watching. It’s the sort of show that just feels so much better when you can immerse yourself in the world for a long period of time, just let yourself go. I highly suggest that you watch this show.

And there you have it. Please let me know what you thought of this review in the comments below, and follow if you’d like to see more in the future!